After this last round of snow, we now have a suitable depth for grooming the classic cross country ski track!

This track will be groomed on the side of the trail closest to the marking stakes.  Please note that the classic track is only being set where the terrain allows.

As always please be safe, stay on the groomed trails, and respect the wildlife.

Posted by Jeffrey Jensen at 12:27 PM No comments:

The winter trails are now officially open for the season.  Just like last year, we will aim to groom the trails three times per week (more often during snow cycles).  Currently, the snow depth is too shallow to groom the classic track.  It will be another snow cycle or two, but we will begin grooming the classic ski track as soon as the snow pack allows.

Please observe club rules and respect the wildlife when utilizing the winter trails.

Enjoy the skiing!
Posted by Jeffrey Jensen at 11:11 AM 1 comment:

Though the golf course is now closed, our season is not over yet.  After removing all of the course accessories, the first project on the checklist is our irrigation winterization.

We will be winterizing the irrigation system this Thursday through Saturday, October 18th - 20th.

If you own a home on the golf course, we remind you that the maintenance team is not responsible for the winterization, maintenance, or repair of your home's irrigation system.  However, if you would like to use the air pressure to winterize your system during these dates you may do so free of charge.

If you have any questions please call the JHGTC Maintenance Office at 307-733-7802.
Posted by Jeffrey Jensen at 9:48 AM No comments:

With the cold temperatures this weekend, the first tee time will be at noon each day.

The pro shop will work to shotgun start anyone looking to play during the nicest time of the day off the front 9 at noon.

Enjoy the golf in the valley while you can!

Thank you.
Posted by Jeffrey Jensen at 10:05 AM No comments:

While it was not nearly as cold overnight as it was yesterday, we will still have a 20 minute frost delay today.

Thank you.
Posted by Jeffrey Jensen at 9:48 AM No comments:

The overnight low was 24 degrees Fahrenheit at the golf course.  With the first heavy frost of the fall, we will need to delay tee times until at least 10:30 am this morning.

These delays will likely be a regular occurrence for the rest of the season.  Keep an eye on this blog or call the pro shop at 733-3111 ext. 1 for the most up to date frost information.

Posted by Jeffrey Jensen at 9:17 AM No comments:

It is that time of year... as the first tee time gets earlier the potential for frost becomes more of an issue.  Currently, the first tee time is at 8:00 am.  Despite this, we have had two substantial frost delays in the last three days.

On Saturday June 23rd the first tee time will move up to 7:00 am for the middle of our summer season.  This could increase the likelihood of a frost delay even though the delays may get shorter as the days get warmer.  As most of you all know, we have the potential for frost in any month of the year.  There may also be the situation where frost does not set up on your yard in town, but it can get cold enough at the golf course to get frosty so please check with this blog or the pro shop for a frost delay update. I will aim to have this blog updated one hour before the first tee time on any morning in which we are delayed.

As always, we will work to get the golf course prepared as quickly as possible.  In addition, my apologies in advance for any inconvenience a frost delay may cause.

Jeff
Posted by Jeffrey Jensen at 1:12 PM No comments:

Last Tuesday we vertical cut the greens during our Tuesday evening maintenance closure on the front 9.  The putting greens responded well, and they are reaching mid season form!

Tomorrow we will continue our fairway recovery efforts.  The plan is aerify the injured areas that have been the slowest to recover.  After the cores are cleaned up, we will then seed and sand topdress.

You may find ropes, stakes, and signs directing golf carts away from these freshly seeded areas.  Thank you in advance for keeping the cart traffic in these areas to a minimum as we allow for the seed to germinate and grow.

Let us hope the warmer days and nights continue... it is June after all!

Posted by Jeffrey Jensen at 3:15 PM No comments: 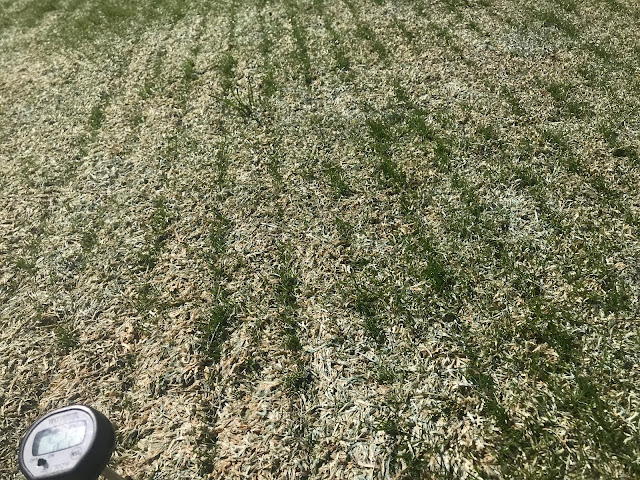 This past week we finally saw soil temperatures in the upper inch of the root zone creep above 50 degrees Fahrenheit.  In addition, dandelions are blooming and many deciduous tree species in our area are finally starting to leaf out.  Mountain bluebirds are pairing up and seeing robins flying around is becoming more common...  all this adds up to a spring that seems to be about two weeks behind schedule... if Mother Nature keeps a schedule?! 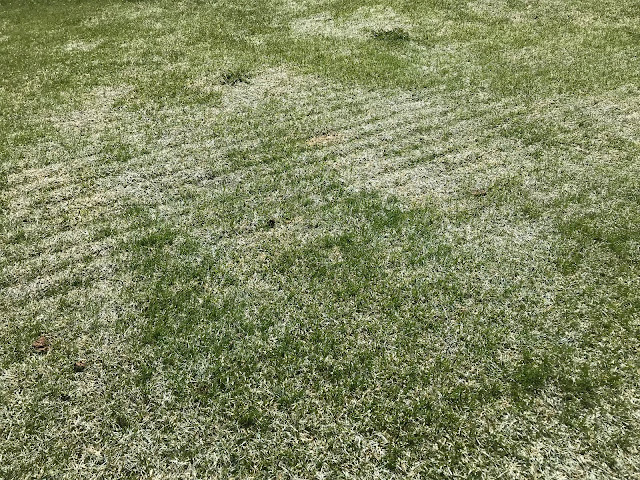 As you can see from the photos above many grass seedlings are starting to emerge in many of the damaged areas. Please do your best to avoid unnecessary traffic in these areas which could damage the tender young grass plants.  But if you happen to be playing a shot in one of these areas, go ahead and take a fat divot and be generous with the sand and seed mixture... that helps too!
The turf maintenance team will be spending this next week vertical cutting the damaged areas again in addition to applying more seed and fertilizer.  After this round of treatments, some of the worst areas may still require some extra attention.  These are predominantly were the cross country ski trail ran during the snow covered months.  We plan to spot aerify these sections when we go around with our second approach aerification of the spring.
Happy Mother's Day!
﻿
Posted by Jeffrey Jensen at 11:27 AM No comments:

Opening Day & What's with the fairways?

Today was a picture perfect day to open for the season!  It was great to see a lot of players ready to go first thing this morning.

Unfortunately, the weather during the late-winter/early-spring this year was far from as ideal as it was today.  As many of you experienced, this winter was really a tale of two winters...  by mid-February the combination of relatively warm weather and a shallow snow pack in the valley exposed many parts of the golf course and warmed the soils underneath the snow.  At this point in time, we were thinking about the possibility of bringing the crew back early to prepare for an early April opening day.

However, winter had other ideas.  Exposed turf was soon re-covered by late season snow falls and a cold snap put us back into full winter mode by the end of February.  While this was great for the final few weeks of the ski season, this winter weather fluctuation is extremely detrimental to turf, particularly annual bluegrass or poa annua.

Normally, in our mountain environment winters remain cold enough that annual bluegrass stays dormant until spring finally decides to show itself.  But this winter, the February thaw was warm enough to allow the annual bluegrass to break its dormancy and begin the uptake of water.  When winter returned the re-freezing damaged any turf plant that came out of dormancy because the water inside the plant cell freezes and expands which ruptures the cell membrane and cell wall.  This type of turf injury is called "crown hydration."

Crown hydration is a typical problem for golf courses in the midwest and northeast because those regions are prone to winters that can fluctuate wildly.  Crown hydration can lead to total death of turf stands in the worst case scenario.  But in this instance, while we took a severe hit, many of the meristems, or growth points, of the grass plants have survived while the surrounding leaf tissue has died.  In general, let us all hope that next winter is closer to the norm!

With that said, the maintenance team will be employing some extra treatments and tricks this spring to speed the recovery of the fairways.  This will keep some of our large equipment out on the golf course later into the spring than is normal for us.  I appreciate your patience in advance as we will aim to work around the players the best we can.  Some of the extra maintenance practices you may see include...
I will be updating this blog regularly on this process in addition to the normal frost delay notifications and general goings on of the turf team.

Once again, thank you for your patience as we will be hard at work to speed the recovery process as fast as mother nature will allow.  In the meantime, please enjoy the extra 10-20 yards of roll on your drives!


Posted by Jeffrey Jensen at 5:07 PM No comments:

An ice layer formed on the putting greens over the last couple of weeks.  Ice and turf do not go well together; over prolonged periods of ice cover turfgrasses will essentially suffocate.  However, our cool-season turfgrasses are usually hardy enough to withstand a short period of ice encasement.  With that in mind, this week's weather pattern was our cue to begin working on the greens for the season.

Today we finished removing snow from the greens.  After snow removal, we also applied a humic acid product that is black in color which helps attract more heat.  This will accelerate the melting of snow and ice in addition to helping the soil temperatures of the putting surfaces warm up faster once the snow and ice clears.

With all this work on the putting greens, the grooming of our ski trails has been suspended for the season.  You may still access the trails, however, please be aware that the warming temperatures and our snow removal equipment have compromised many sections of trail.

I hope you all have enjoyed the winter season and are looking ahead to another great golf season.  As always, if you feel the need to be on the golf course during the shoulder season, please be respectful of the putting greens, equipment operators, and migrating wildlife.

Posted by Jeffrey Jensen at 2:38 PM No comments: